At the end of the sixties, the great sales boost brought about by the AR105 project was starting to be less important than in previous years. The models were all less successful, but the competition had learned their lesson and was beginning to win back the interest of customers. There were those who had accepted. The gauntlet by pushing on the accelerator of technical innovation and others on the new stylistic trends, those who had instead focused more on comfort and practicality, but it was clear that the rounded, rounded lines and general characteristics of the Giulia would not have continued for a long time to satisfy the taste of the Alfisti. 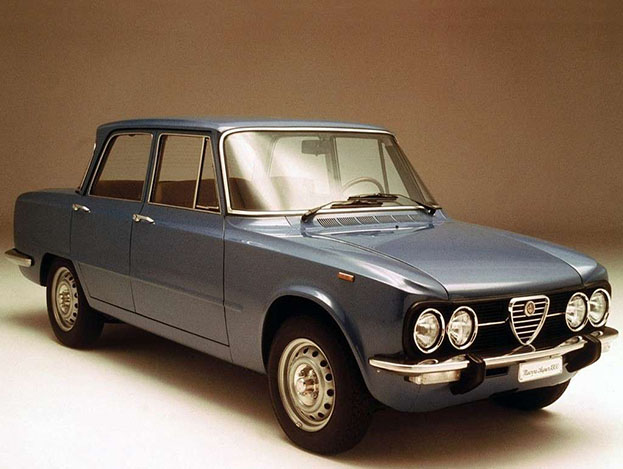 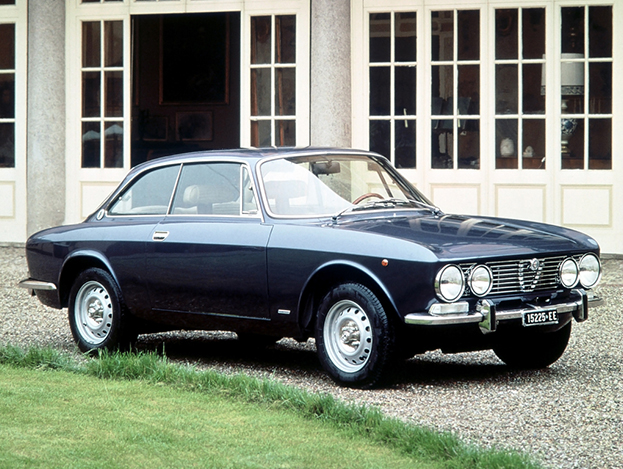 At the Alfa Romeo Style Center, led by Giuseppe Scarnati, they began work on a new project (AR116) for a sports sedan, a market sector in which Alfa Romeo were still considered to be at the forefront. There was also a participation of Giorgetto Giugiaro, who already in 1968 had been commissioned to design the new coupe of the biscione, which later became the Alfetta GT. The lines were squarer, smoother and angular, aggressive and streamlined, closer to the style of the car that was taking shape in the aesthetic tastes of those years.

In addition to aesthetics, the technical aspect was also considered. To increase the stability of the car, a weight positioning scheme was used that improved the set-up, already used in 1950 and 1951 in the Formula 1 Types 158 and 159: front engine and gearbox, clutch and differential block in the rear. It was also chosen to use the nickname with which the fans had nicknamed those cars that won the championship, “Alfetta”. 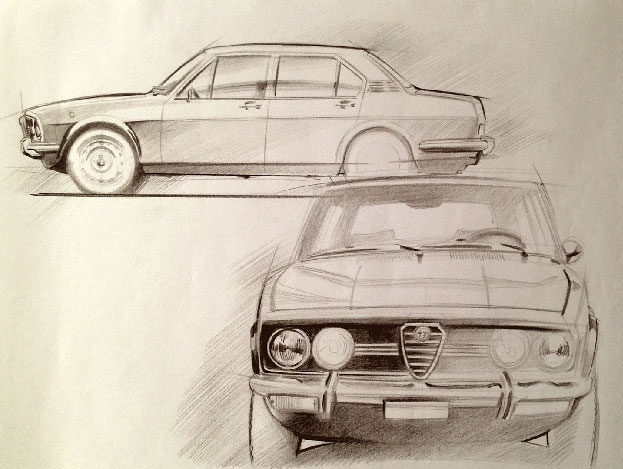 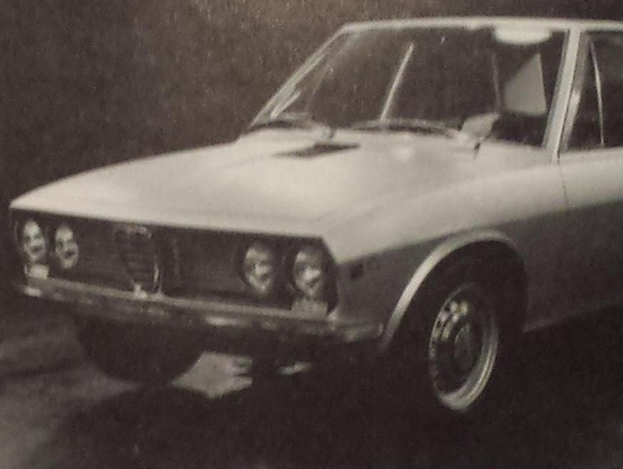 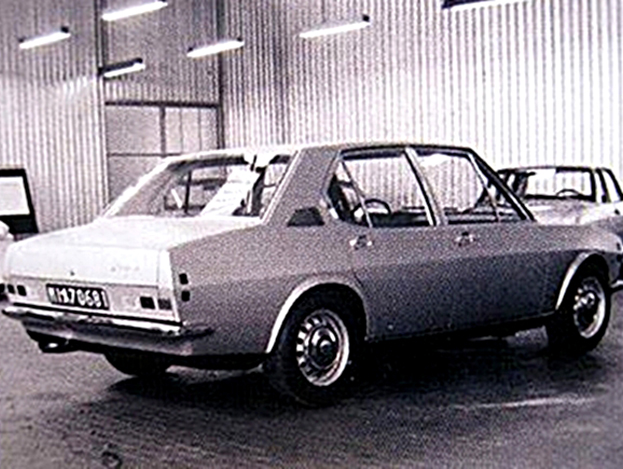 
After a series of hesitations and second thoughts by the management, it was finally officially presented to the public in May 1972. The era of the Alfetta had begun, a car that immediately proved to be of an excellent level, both in terms of performance and style. 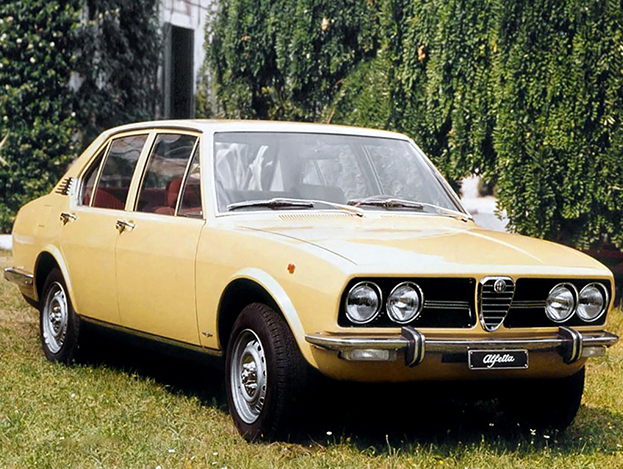 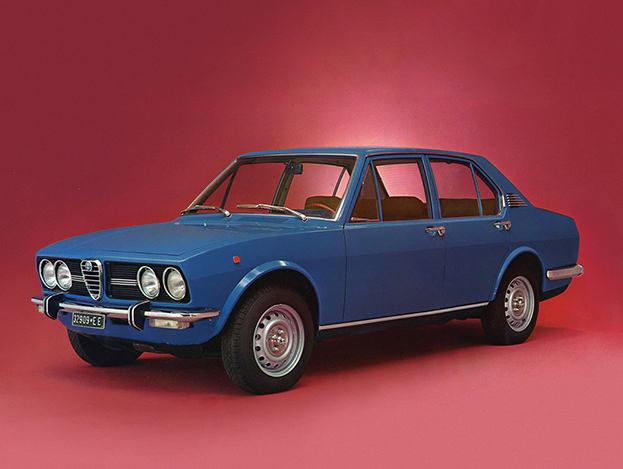 The worldwide success of the Giulia had opened many doors, but also significantly raised the bar compared to the competition. However, this did not turn into a real advantage for the Arese house. Too many fronts were opened together. The Giulia was towards the end of its "race", but it was selling fairly well and the company was still leaving it in production. The Alfasud had come out shortly before the Alfetta and even if it had started with the best conditions, an Italdesign project by Giugiaro and an excellent Boxer engine with front-wheel drive, it did not shine for sales and the approval of the public. In this decidedly critical atmosphere, the set-up innovations introduced on the Alfetta also aroused a dispute among the Alfisti and even if the new model had gained a lot in road holding and stability, the long and complex gear lever too direct, compared to previous models. The company, undecided about what to do, left the Giulia in production until 1977, causing internal competition, which in addition to external competition did not favour the passage of customers to purchase the new Alfetta.

A project born well, innovative and efficient, which represented an important step forward compared to the previous production, was launched on the market without the conviction and determination that had instead determined the success of Alfa Romeo in the sixties and this "indecisive" way of management, it determined the future of Alfetta. Production costs had risen and the selling price was consequently that of a high-end sports sedan, but the quality of the components that had distinguished the Alfa Romeo brand was no longer the same. Poor plastics and the lack of care in assembly did not enhance the quality of the technical choices. The model with several restyling, modifications and difficulties in the sales phases still managed to become the reference point in the market. Production went on until 1984, when the Alfa 90 replaced the Alfetta and then the Alfa 75 was released. The set-up and the technical system with the distribution of the car weights (front engine and gearbox, clutch and rear differential) was still the same and was still the strong point of the Alfa Romeo cars of the eighties. The "Alfetta" set-up was abandoned only after the company was transferred to the FIAT Group, with the arrival of the front-wheel drive 164. 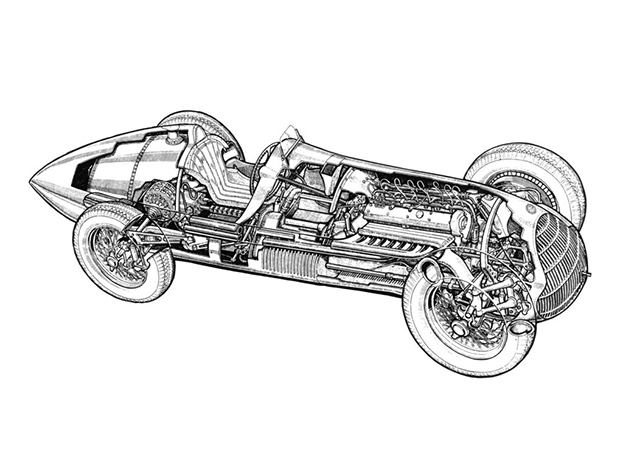 
The GT version also contributed a lot to the success of the 116 series. Giugiaro's project already began towards the end of the sixties and aimed to enhance the best of the characteristics of the Giulia GT, which he had designed when he was still part of Bertone. On that basis he conceived an evolution of spaces and volumes, improving the inclination of the windshield with the coefficient of penetration into the air, the internal dimensions and the boot, equipped with a tailgate, making a "real" four-seater sports car also a family car. After some tests with prototypes that were built over several years, the definitive model came out in 1974, the Alfetta GT which used the same slightly shortened chassis and powered by the same 1800 engine as the sedan version. The impressions of the specialized press, especially the foreign one, were immediately positive and sales went accordingly. 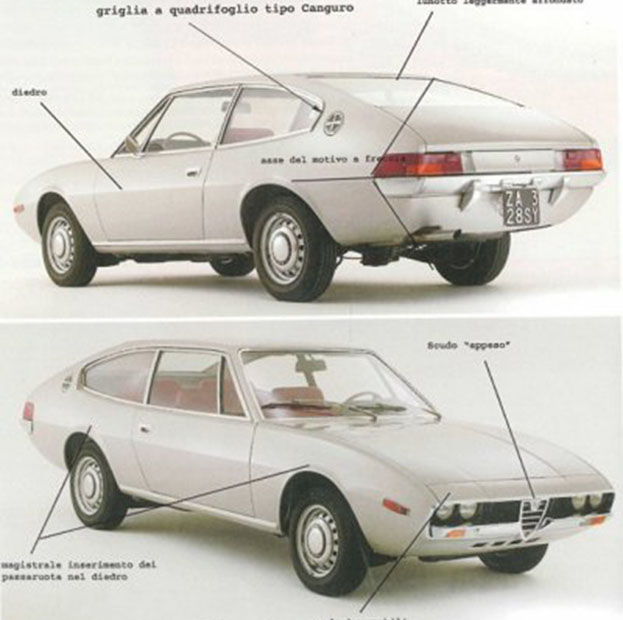 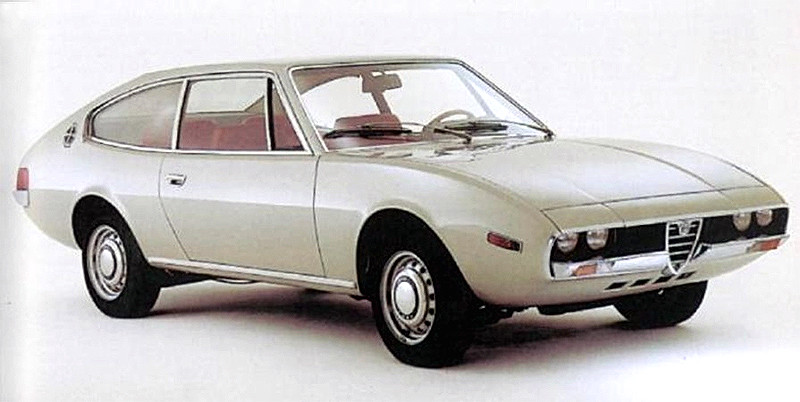 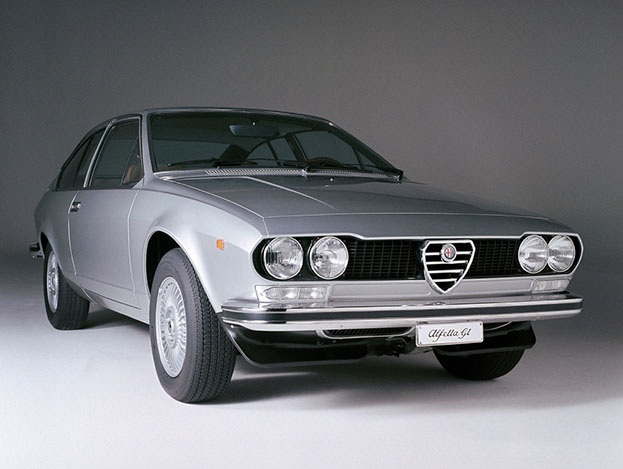 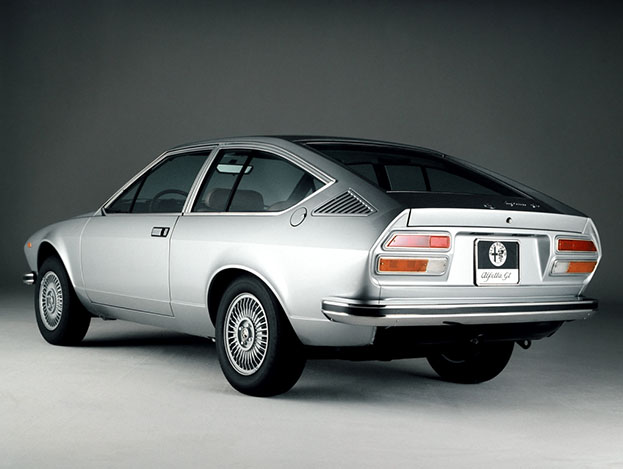 
In 1977, in order to recover the low-end sports sedan market, they put either the Nuova Giulietta (1.3 and 1.6) on the market. Although the idea was to give a cheaper alternative to the Alfetta, overall the Giulietta followed the choices made with its older sister and the weight was not much less, so as to allow the 1.3 version of the performance worthy of a ' car left the snake assembly line. This model also followed the fate of the sisters of the 116 series, a life without infamy and without praise, with small peaks of fame for some versions particularly apt in the colours and engines. 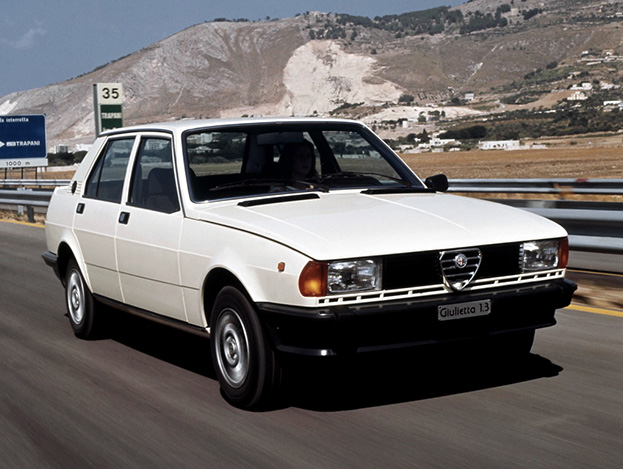 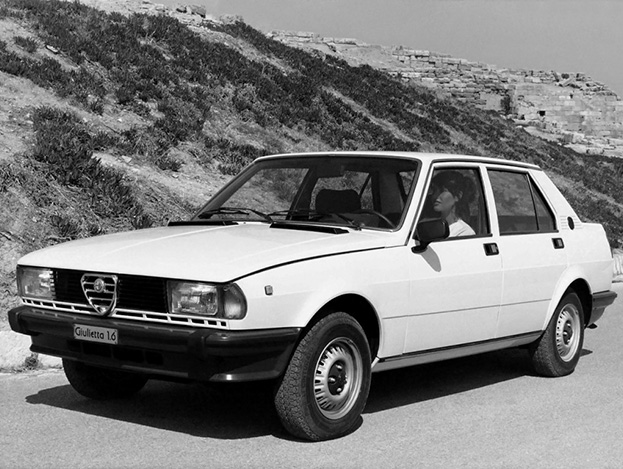 
In short, everything went well in the end? Not exactly! Alfa Romeo not achieving to the same success achieved with the Giulia, for many years was always looking for a car that would allow it to become the market leader again, but it did not succeed.
There were many 116 versions built on a Berlina and GT base. Sometimes with small productions and localized customizations of a few specimens. From the beginning, given the decline in sales, the oil crisis and competition, it was decided to find a greater outlet on the continental market. In the USA, the Spider was fine and an Alfetta Sport Sedan version was chosen that complied with US automotive regulations. On the basis of this version, the other versions destined for foreign countries were also made: United Kingdom, Germany, France, Australia, etc. The same approach was used for the GT version, resulting in "limited edition" productions ranging from 20 to 200 or 600 units. In any case, Alfetta sales abroad did not go great. Foreign customers were very demanding in terms of quality of components and judged the assembly and test defects of the cars unacceptable.
When the Alfetta and Giulietta production ended to make way for the 90 and 75, the company's situation was quite critical. Soon the company passed into the hands of the FIAT Group and the Alfa Romeo brand lost much of its charm and prestige for many years. 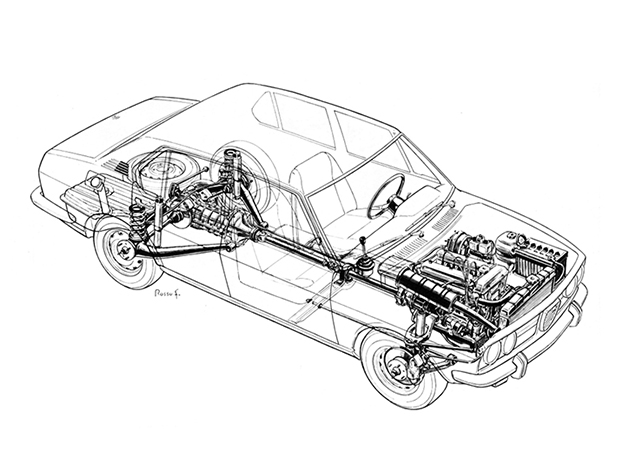 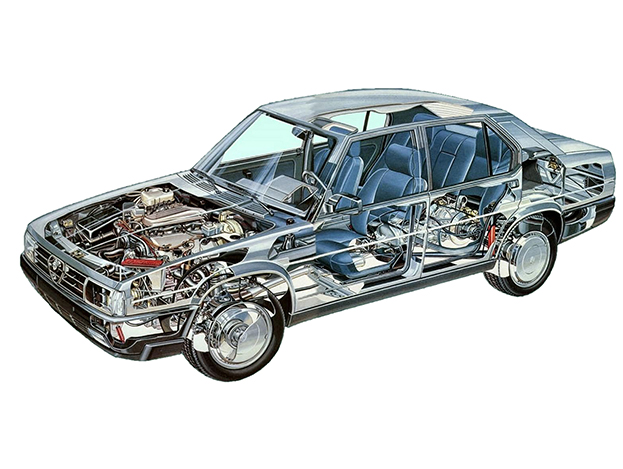